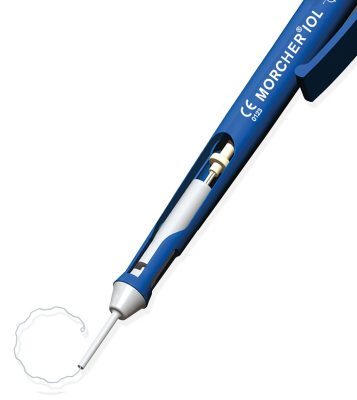 Request more information about this product.

The Henderson CTR designed by Bonnie Henderson, M.D is a modification of the Morcher® CTR. This ring has eight equally-spaced indentations that allow for easier nuclear and cortical material removal while still maintaining the desired stretch of the capsular bag.

The ring is an open C-shaped loop made of a single piece of Polymethyl Methacrylate (PMMA). Employing a Morcher propriety process (CFM) in the manufacture, the PMMA has enhanced flexibility and resistance to breakage. The ring performs the same basic function of standard CTRs by stabilizing the capsular bag before, during and after cataract surgery. Once the residual material has been removed from under the indentations the Henderson CTR can be rotated to change positions of the indentations to allow further removal of lens material that was compressed by the indented portion of the Henderson CTR.

This CTR is available preloaded on an EyeJet or can be inserted manually or with Geuder® Injector.

• Designed by Bonnie Henderson, M.D.
•For easier cortical removal while maintaining the desired stretch around the capsule
•Preloaded on the EyeJet® single use injector
•Unloaded CTRs can be inserted manually or with the Geuder Injector
•Opened and flexible filament of PMMA

You have X selected

Questions about our products?